My Experience With EMDR

The brain. The central organ in the human body. The control room for everything our body sees, hears, tastes or experiences. Our brains are quite literally responsible for all of our bodies’ functionality. But for a lot of us, our brains have been affected by Post-Traumatic Stress Disorder (PTSD). And while there is definitely truth to the active-duty-soldier narrative, people suffer from PTSD for a variety of reasons – anything from being bullied as a child, some kind of physical, sexual, or emotional abuse, or experiencing a traumatic event. People like me.

When you look at me, you see a 4’10” young, happy, normally-functioning girl. You see my glasses, my multicolored hair, and my dirty Vans. You see me working with the kids I nanny for or working merch for my boyfriend’s band. What you do not see is that my brain is hurt, and has been for many, many years. If you were to take an MRI scan of my brain, it would not look like a “normal” brain because I have PTSD. As stated above, you can develop PTSD through many different scenarios. Secondary trauma can even come just from watching something on TV or the news. After 9/11, many people were found to have developed PTSD just from repeatedly watching those horrific images. The causes of PTSD are different for everyone. For me, it was a number of things built up over the course of growing up. I was diagnosed with PTSD at an early age but never understood why exactly or what it was. I was 16.

They said it first came from being abused by a boy I “dated” when I was 13, and it would continue with many similar incidents as I got older. It wasn’t until I got in my early 20s and really started to notice that I felt different. I didn’t do relationships well and I was always scared of men. I would have nightmares, and would experience a sensation known as body memories, where your mind tricks you into physically feeling a traumatic event occurring again, even though it isn’t really happening. I wouldn’t let people in or get close and you could forget about kissing me or anything sexual. I felt like a mess. I hated myself and thought no man would ever want to be with me. I didn’t even want to be with me. I hated my brain and questioned why it was doing this to me. I’d see my girlfriends or women on TV going on dates, and being in happy relationships, and it looked so easy. I thought “I want that,” but I swore it was out of my reach. Even just the thought of a guy getting that close, or even hugging me, made me uncomfortable. I needed help.

It was so hard to get those words out for the first time… “I was raped.” But there it was. There was the big issue. The root of all my other issues. I saw many therapists and tried many different ways to deal with my PTSD. We tried talking about it. We tried ignoring it. We tried role-playing. Once I was even hypnotized without knowing it, and obviously never went back there again! I even did pelvic therapy to gain back control of my body. But when I tried to be sexual with someone, I freaked out and he never saw me the same way again. As frustrated as I was, and even though I was full of doubt and thought I was damaged and broken, I decided to try again. A real try. So I did research, and I was referred to a counselor/therapist who specialized in women’s issues and PTSD.

Her office was near my home and we clicked right away. After a few sessions of getting to know her and learning more about PTSD, I told her I wanted my life back and was willing to try anything. She introduced me to a treatment called EMDR.

EMDR stands for Eye Movement Desensitization and Reprocessing. This means that the body is healing itself during rapid eye movement which happens during REM sleep, a time when the mind can heal itself. It makes sense to use that time to treat PTSD, and EMDR can be used to treat other forms of mental illness as well. The difference is, you are awake during EMDR.

Before dealing with a stressful situation that would increase my anxiety, we started with a small session. I skeptical at first, but surprisingly I didn’t have any anxiety during that particular situation. After that first experience, I was ready to try the first real session of EMDR for my PTSD.

My therapist explained what she was going to do and how it worked. She showed me a picture of what a brain looked like with PTSD before EMDR and after. She explained the process as taking the trauma and physically moving it from one side of the brain to the other so you can process it more rationally. I learned that there are a couple of ways to do EMDR. One way is using lights, and another uses paddles, and a wand is often used. We used paddles. She sat me down and told me to breathe, turned on a diffuser, and handed me two paddles. She said to put the paddles in my hands but keep them away from each other, and she would make them pulse at random times throughout the session. The paddles act the same way as the lights do by activating the left and right frontal lobe of the brain, allowing the trauma to be processed rationally and become just a memory. This way when someone is triggered, they will not experience the trauma effects the same way they did before.

Next she had me look at a list of words. This was our base to start dealing with what I was feeling in regards to the trauma. She had me pick a protector to go along on my journey, so I picked my old dog, Julie. Then she said to pick a place where I felt calm and safe. I picked a quiet beach. I love the beach. Then she had me build a container. This is where I would trap the traumatic memories. So I closed my eyes and she would then guide me on my journey.

This is where the healing began. She started making the paddles pulsate while asking me to discuss one of my traumas in detail. She had me describe it as if I were watching it in movie. And while I had to watch it over and over, it got easier with each repetition. I wasn’t hypnotized and I was not asleep, but I really don’t remember the rest. As I was repeating back the event, my brain was taking that traumatic experience and turning it into a memory. Something of the past, associated with something else, where it will no longer hold that power over me. I was reprogramming decades of abuse and awful memories as well as working on anxiety, and other aspects of my mental health.

After 30 to 60 minutes, I would come around and feel very weird. Almost high, but not. Very relaxed but drained. She said she could see when my brain had clicked or turned over on the days we made progress. Some days are great. I start out with a level of 10 where I am anxious or feel uneasy about my trauma and can lower it significantly. Other days it doesn’t decrease as much. But I know it will in time. Afterward a session, I normally go home and crash. It takes it out of you!

EMDR may not work for everyone. And you have to be really open to it and understand it is going to be painful and hard. You are opening up a box of your worst memories and your worst fears and are rewatching them like a Netflix series. But it can be beneficial. Especially if you work at it. I have met a few people who have done it and have come a long way in dealing with their PTSD.

After working on this for almost a year now I have noticed a huge change, the biggest being my confidence and sense of self-worth. I know I am not broken or damaged. I am able to manage my anxiety without medication. My sleep is still an issue, but I no longer have those body memories or nightmares. And I still retain some tiggers, but I’ve also been able to stand up for myself when I was being touched and didn’t want to be. And I was confident enough to tell my story.

Three years ago, before I started on my EMDR journey, I met a guy who I really thought I could possibly have a future with. And even though I wasn’t ready at that time to pursue any kind of romantic relationship, he stuck around as a very supportive friend through my process of starting to find myself and beginning to heal. He didn’t bail. He was there when I needed him, and now we are going on 6 months together. I couldn’t be happier. He is super supportive and understanding and does not see me as damaged or broken. I know I have a long journey ahead and I know it is going to be hard and sometimes unpleasant, but I am lucky to have a great support system and great therapist.

EMDR really has changed my life. If you are having problems with your PTSD, your therapists, or mental health in general, do research for your specific needs. Don’t give up until you find one. Trust me, it is worth it in the end. 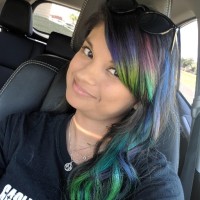 Kristin is a social work student, an avid live-music goer, and has recently developed an addiction to vinyl. Kristin has been a volunteer for AVFTI since January 2018, is also Tuesday's Daycaptain, and she loves a good slice of pizza.

A Different Kind of PTSD for Assault Survivors
Previous

DBT For PTSD
Next